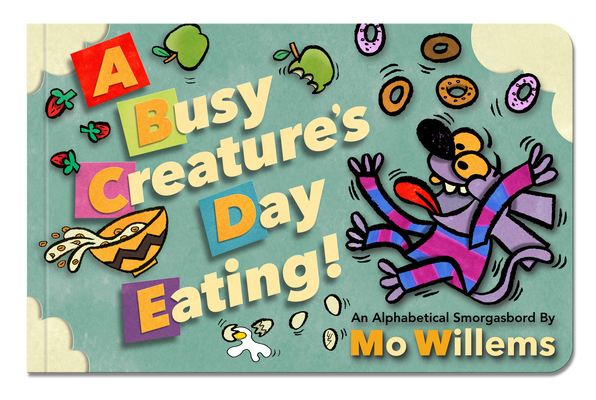 By Mo Willems
$8.99
Available In Our Warehouse

Mo Willems delivers a smorgasbord of hunger, hubris, regret, and redemption as a Busy Creature hilariously chomps and chews its way through the alphabet now in board book format.

Mo Willems (www.pigeonpresents.com), a number one New York Times best-selling author and illustrator, has been awarded a Caldecott Honor on three occasions, for Don't Let the Pigeon Drive the Bus!, Knuffle Bunny: A Cautionary Tale, and Knuffle Bunny Too: A Case of Mistaken Identity. He has won two Theodor Seuss Geisel Medals, and five Geisel Honors for his celebrated Elephant & Piggie series. Mo began his career as a writer and animator on Sesame Street, where he garnered six Emmy Awards.

"There are a lot of laughs in this feeding frenzy, but just as much tenderness in the final scenes, which poignantly reflect the ABCs of TLC."—Publisher's Weekly (starred review)

"Creative and hilarious, Willems' alphabet book has all the right ingredients to become a hit. Be prepared to binge read this one."—Booklist (starred review)