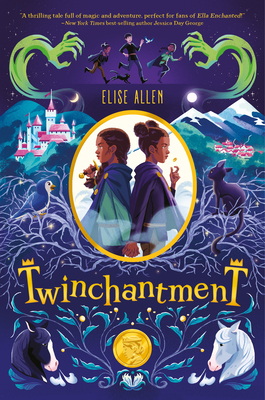 By Elise Allen
$8.99
Available In Our Warehouse

In the kingdom of Kaloon, nothing is quite as it seems....
"Y-y-y-you," he stammered, and Flissa turned to see he'd gone ashen. "T-t-t-two of you!"
Uh-oh.
Flissa reached up and checked. Sure enough, her hood had fallen off.
Their secret was out.
Princesses Flissa and Sara are even closer than most twins. In fact, most of the kingdom thinks they're the same person.
When magic was outlawed in Kaloon generations ago, twins, black cats, and other potentially -magical beings were outlawed, too. Since they were born, Flissa and Sara have pretended to be one princess, Flissara, trading off royal duties like attending glamorous balls, participating in fencing exhibitions, and making friends with other young nobles, all while hiding in plain sight.
But when the first magical attack in years puts their mother's life in danger, the girls must break the rules that have protected them to save her. Enlisting a brave servant boy and his plucky black kitten as their guides, they set off on an epic quest to the Twists-a forbidden place full of dark magic-to find the evil mage who cursed the queen. With a case of mistaken identity, a wickedly powerful exile out for vengeance, and time running out for their mother, the twins might just need to make their own magic to save the day.
In the first book of this new series, author Elise Allen brings to life a fantastical world filled with high-stakes adventure, incredible twists, and all the spark and humor of sisterhood.

New York Times best-selling author and Emmy-nominated television writer Elise Allen lives in Los Angeles with her husband, daughter, and dog . . . who is clearly a Magical Animal. She is the co-author of the Gabby Duran and the Unsittables series (now on TV at Disney Channel!) and the YA novel Populazzi. She has also written for several television shows, including The Lion Guard, Rainbow Rangers, and Abby Hatcher. You can find her on Twitter @EliseLAllen, on Instagram @eliselallen1, at her website, www.eliseallen.com, or hanging around Disneyland, where she likes to sit at her computer and write while waiting for her Fast Pass times.

"A bubbly series start with strong characterizations, high appeal, and some thoughtful commentary."—?Booklist

"Heartwarming tale... [a] series opener with an enduring feel."—?Publishers Weekly

"There's magic on every page, and not just of the spellcasting variety. Twinchantment is a fun, exhilarating, and heartwarming story about finding strength in family... and in being yourself."—?Zack Loran Clark & Nick Eliopulos, authors of The Adventurers Guild series

"Twinchantment is nothing short of TWINCHANTING! A magical, action-paced, girl power adventure through a fantastically imagined fantasy kingdom. The surprising twists in the tale will keep readers guessing till the very end and leave them hungry for book two."—?Mari Mancusi, author of The Camelot Code: The Once and Future Geek