Some Bunny to Love (Paperback) 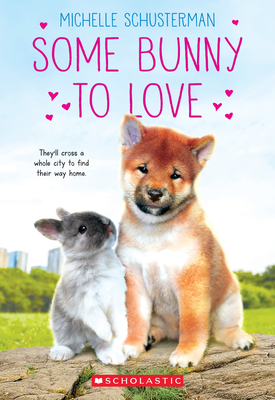 By Michelle Schusterman
$6.99
Available In Our Warehouse

A lost bunny teams up with a rascally, streetwise puppy to find her way home in this adorable friendship story set in New York City.

Laura Rodriguez's pet bunny, Evie, is kind of a star: She's the mascot of the Rodriguez family's corner bodega in Harlem. Local residents stop by the small store every day just to see Evie. And even though people tend to make Evie nervous, Evie knows she's safe as long as Laura is around.

But when Laura and her family go out of town for a few days, Evie suddenly finds herself in unfamiliar surroundings. Laura couldn't have meant to leave Evie with the snooty Mrs. Vanderwaal, could she? Frightened, Evie makes a run for it, determined to find her way back to the bodega - even though she has no idea where she is. All she knows is that she's in a vast green park in the center of New York City.

That's when Evie meets the streetwise Bart, a stray Shiba Inu pup who is perfectly fine being on his own. He doesn't need an owner, thank you very much. Together, this unlikely duo embarks on a journey to cross Central Park, encountering countless tourists, dastardly dog catchers, and other animals. It's a long way, but if they can set aside their differences and work together, then maybe - just maybe - they can find their way home.

Michelle Schusterman is the author of I Heart Band, a Scholastic Reading Club pick, The Kat Sinclair Files, and Olive and the Backstage Ghost. She's also an instructor at Writopia Lab, a nonprofit organization that offers creative-writing workshops for children and teens from all backgrounds. Find out more at michelleschusterman.com.