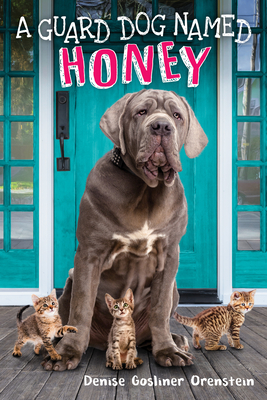 By Denise Gosliner Orenstein
$16.99
Available In Our Warehouse

What happens when a girl tries to steal a dog -- but the dog steals her heart instead?

I made my birthday vow: I would get Willis out of jail, no matter what.

When Bean's brother gets arrested for joyriding in a stolen car, Bean is devastated. She's determined to get him out of jail by raising the bail their mom can't afford. She tries everything, from applying for summer jobs, to offering to paint summer mansions. It's at one of those old mansions that she meets a young girl named Phoebe and her giant (and very valuable) guard dog, Honey.

Bean quickly hatches her plan: She'll convince Phoebe to sell Honey and let her use some of the cash for bail.

But when Honey's sale takes a dangerous turn, Bean is torn between her desire for her brother's freedom and her loyalty to Phoebe and sweet, drooly, affectionate Honey. Can Bean fight for her family without betraying her new friends?

Denise Gosliner Orenstein has taught at American University in Washington, DC, as well as in bush villages throughout the state of Alaska. She has also cooked for an Alaskan village prison, worked as a PEN prison writing mentor, and taught literature classes and assisted in a canine therapy program for inmates. Most recently, as head of a school for children with learning differences, she introduced a curriculum based on two rescued Shetland ponies. Denise is the mother of two daughters and lives in Northampton, Massachusetts.

"This is an emotionally absorbing story with rich themes about redemption and friendship." -- School Library Journal

"Yonder is an engaging protagonist whose intimate, frequently poetic first-person narrative captures her unspoken sorrow and dilemmas... Her issues are sympathetically drawn in an often eloquent, affecting portrayal of loss, friendship and healing." -- Booklist

"Orenstein writes with a lively voice and she paints a colorful picture of Yonder's small Vermont town; Dirt is also an entertainingly mischievous and voracious pal... A troublemaking and understanding pony is an appealing hook... and would-be pony saviors will likely cheer Yonder's mission." -- Bulletin of the Center for Children's Books

"Yonder doesn't speak but she has plenty to say; when a grumpy one-eyed pony listens to her, it gives her the courage to fight for them both. Realistic, difficult, and inspiring." -- Kimberly Brubaker Bradley, Newbery Honor-winning author of The War that Saved My Life

"This book has a heart as big and brave as a Shetland pony." -- Wendelin Van Draanen, Edgar-winning author of the Sammy Keyes Mysteries

"Dirt is a beautifully written tale with heartfelt characters and a riveting story. Inspiring!" -- Phoebe Stone, author of The Boy on Cinnamon Street