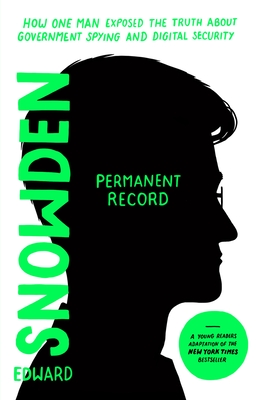 By Edward Snowden
$19.99
Available In Our Warehouse

A young reader’s adaptation of whistleblower and bestselling author Edward Snowden's memoir, Permanent Record—featuring a brand-new afterword that includes resources to learn about the basics of digital security.

In 2013, Edward Snowden shocked the world when he revealed that the United States government was secretly building a system of mass surveillance with the ability to gaze into the private lives of every person on earth. Phone calls, text messages, emails—nothing was safe from prying eyes. Now the man who risked everything to expose the truth about government spying describes for a new generation how he helped build that system, what motivated him to try to bring it down, and how young people can strive to protect their privacy in the digital age.

“Snowden's sprightly prose, his deep technical knowledge, his superb knack for explaining complex matters, his ability to articulate principled action all come together in a book that is, if anything, BETTER than the adult version.” —Cory Doctorow, BoingBoing

Edward Snowden was born in Elizabeth City, North Carolina, and grew up in the shadow of Fort Meade. A systems engineer by training, he served as an officer of the Central Intelligence Agency, and worked as a contractor for the National Security Agency. He has received numerous awards for his public service, including the Right Livelihood Award, the German Whistleblower Prize, the Ridenhour Prize for Truth-Telling, and the Carl von Ossietzky Medal from the International League of Human Rights. Currently, he serves as president of the board of directors of the Freedom of the Press Foundation.

"Snowden's sprightly prose, his deep technical knowledge, his superb knack for explaining complex matters, his ability to articulate principled action all come together in a book that is, if anything, BETTER than the adult version." —Cory Doctorow, BoingBoing

"A fascinating look behind the scenes of real-life espionage." —School Library Journal

"An absorbing read about digital privacy and one man’s fateful choice to disclose government secrets." —Kirkus

“A riveting account... Reads like a literary thriller... Snowden pushes the reader to reflect more seriously on what every American should be asking already. What does it mean to have the data of our lives collected and stored on file, ready to be accessed? When it comes to privacy and speech and the Constitution, his story clarifies the stakes.” —The New York Times

“Gripping... Snowden demonstrates a knack for explaining in lucid and compelling language the inner workings of [CIA and NSA] systems and the menace he came to believe they posed.” —The Washington Post

“Well-written . . . Offers a useful reminder of the god-like omniscience that digital data can bestow on those with the power to collect it all.” —The Economist