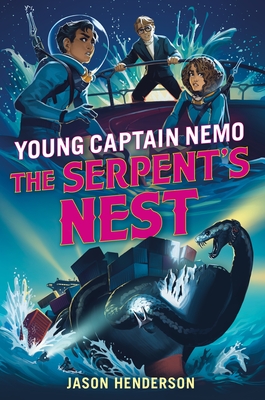 In Jason Henderson's The Serpent's Nest, the third and final installment of the action-packed middle grade series Young Captain Nemo, a twelve-year-old descendant of Jules Verne’s famous antihero must face down giant sea serpents and solve a centuries old mystery, armed only with his wits, his friends, and his Nemotech submarine.

Gabriel Nemo has never been your normal, everyday twelve-year-old. As a descendant of the famous Captain Nemo, he’s determined to use his Nemotech legacy for good. He and his best friends, Peter and Misty, spend their days studying at the elite Nemo Institute and their spare time trying to solve the mystery of what happened to the original Captain Nemo and his crew.

An engraved anchor pin from the abandoned Nautilus leads the trio to Cardiff Bay in Wales, where they find signs of mysterious underwater rescues. But before long, their search is interrupted when they cross paths with a new kind of sea serpent. Can Gabriel and his friends solve the mystery of the Serpent's Nest before things turn deadly?

Jason Henderson, author of Young Captain Nemo, is a regular speaker on media and entertainment. His popular podcasts “Castle Talk” and “Castle of Horror” feature interviews and discussion panels made up of best-selling writers and artists from all genres. His young adult series, Alex Van Helsing, was named by the Texas Library Association to the 2011 Lone Star Reading List. He also writes for games and comics. Henderson earned his BA from University of Dallas in 1993 and his JD from Catholic University of America, Columbus School of Law in Washington, D.C., in 1996. Henderson lives in Colorado with his wife and two daughters.

"The second aquatic adventure in this series starts its action on page one and keeps the stakes high and the adventure swimming along... a solid story set in a very original and specific undersea world full of gizmos and submarine vessels, and it can be enjoyed on its own merit with or without reading book one." —Booklist Online on Quest for the Nautilus

"Once again, Henderson has readers diving into the ocean’s depths on an adventure-packed quest with Gabriel and his crew. It’s fantastic to see a story in which friends not only communicate well but also help one another “work the problem” as issues arise on their search for the infamous Nautilus. ... Gabriel and his crew will please seafaring science nerds or anyone seeking a new group of characters to love." —School Library Journal on Quest for the Nautilus

"There’s both futuristic and classic steampunk appeal here, admirably mixing Jules Verne lore with 007-level gadgetry. Stakes are high, the pace is fast, and there are excellent (and surprisingly subtle) messages of coping with childhood loneliness and the importance of taking care of our planet’s oceans." —Booklist on Young Captain Nemo

"Fractured retelling of 20,000 LEAGUES UNDER THE SEA...that will have Jules Verne fans geeking out.... However, a reader who’s never even heard of The Nautilus will devour this timely STEM / sci-fi adventure story." — KidLit Underground on Young Captain Nemo