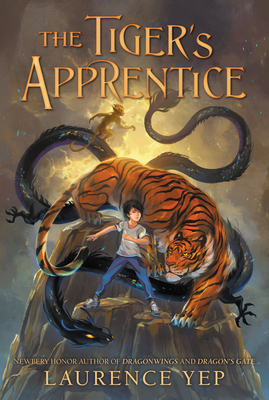 By Laurence Yep
$7.99
Available In Our Warehouse

Soon to be an animated movie!

Don’t miss this middle grade fantasy adventure about a boy, a magical tiger, an outlaw dragon, and a mischievous monkey who carry the fate of the world on their shoulders. From two-time Newbery Honor-winning author Laurence Yep (Dragonwings, Dragon’s Gate), now with an all-new cover and introduction!

Tom Lee’s life changes forever the day he meets a talking tiger named Mr. Hu and discovers that he has magical powers and great responsibilities that he never imagined. Despite his doubts and fears, Tom joins Mr. Hu’s ragtag band of creatures in their fight to keep an ancient talisman out of the hands of the worst possible enemy.

This action-packed fantasy from two-time Newbery Honor-winning author Laurence Yep reveals a hidden world within our own where animals take human form, where friendship is the final weapon in the battle between good and evil, and where a young boy is responsible for saving the world he knows . . . and the one he is just discovering.

This updated edition includes an all-new introduction by Laurence Yep!

Laurence Yep is the acclaimed author of more than sixty books for young people and a winner of the Laura Ingalls Wilder Award. His illustrious list of novels includes the Newbery Honor Books Dragonwings and Dragon's Gate; The Earth Dragon Awakes: The San Francisco Earthquake of 1906, a Texas Bluebonnet Award nominee; and The Dragon's Child: A Story of Angel Island, which he cowrote with his niece, Dr. Kathleen S. Yep, and was named a New York Public Library's "One Hundred Titles for Reading and Sharing" and a Bank Street College of Education Best Children's Book.

Mr. Yep grew up in San Francisco, where he was born. He attended Marquette University, graduated from the University of California at Santa Cruz, and received his PhD from the State University of New York at Buffalo. He lives in Pacific Grove, California, with his wife, the writer Joanne Ryder.